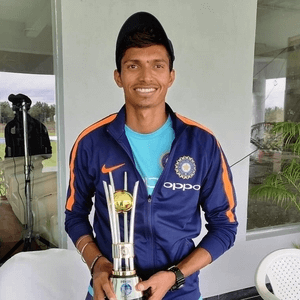 Navdeep Saini was born on November 23, 1992, in Karnal, Haryana.  His father, Amarjeet Singh Saini, is an ex-Haryana government employee who used to work as a driver there. His mother’s name is Gurmeet Kaur, and she is a homemaker.

His grandfather Karam Singh Saini was a Subedar in Azad Hind Fauz and had provided services under great Netaji Subhash Chandra Bose. He has an elder brother named Mandeep Saini.

He did his schooling at Karnal’s Dyal Singh and college and completed his graduation in Computer Science from Kurukshetra University.

From a very young age, he used to bowl fast bowling. He couldn’t take formal cricket training due to the lack of money source. So, he used to travel a lot far away from his home to practice.

Later, he somehow arranged some money and participated in Karnal Premier League. In the same league, Sumit Narwal, Delhi’s fast bowler and organizer of that league, recognized his talent and helped him a lot to be a cricketer.

From Tennis ball to Leather cricket:

In December 2013, Navdeep went for a practice session at Roshnara Cricket Ground, where Delhi’s Ranji Team was practicing at that time. Former Indian opener Gautam Gambhir was also there, who later asked Saini to bowl to him.

He impressed Gambhir with his bowling skills. Later, the former opener insisted Delhi Cricket Board’s selectors for selecting him in the team.

But, DDCA stated that “Navdeep is not a domicile of Delhi, and neither he has played any age-group cricket for Delhi, which makes him an Outsider.” However, all his hard work and outstanding bowling skills earned him entry into the team.

On December 14, 2013, he made his First-Class debut against Vidarbha in Ranji Trophy, in which he took 2 wickets in his 16 overs.

Almost 2 years later, on December 10, 2015, Saini started his List-A career for Delhi by playing against Baroda in the Vijay Hazare Trophy. He took 2 wickets in the match at an economy of 5.10.

Subsequently, he made his T20 debut against Railways in Syed Mushtaq Ali Trophy in the year 2016. 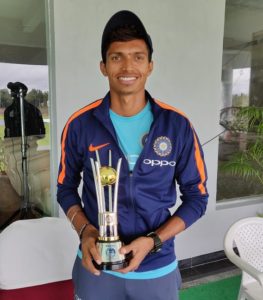 The next year, in 2017, he played for the India-A team against South Africa, in which he took 7 wickets in 2 matches.

In June 2018, he was selected in the Test squad against Afghanistan but didn’t get any chance to play.

However, on August 03, 2019, Saini made his International debut in a T20 match against West Indies. He took 3 wickets that day in his 4 overs quota with an economy of 4.25. 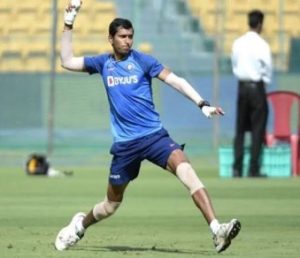 Later, he was selected as one of the stand-by players for World Cup 2019 along with Rishabh Pant and Ambati Rayadu.

On December 19, 2019, he was named as the replacement of Deepak Chahar for India versus West Indies 3rd ODI. And then, three days later, on December 22, 2019, Saini made his One Day International debut against West Indies. He took two wickets for 58 runs in the 10 overs he bowled.

Then, on January 07, 2021, he made his Test debut against Australia in Sydney. His maiden test wicket comes in the form of Will Pucovski. He picked a total of four wickets in that match.

Q2: Who is the girlfriend of Navdeep Saini?

Ans: He is dating to Pooja Birjania.

Q3: What is the height of Navdeep Saini?

Q4: What is the highest bowling speed of Saini?

Hope you liked the Biography of Navdeep Saini and if you have any query related to it, then definitely tell us in the comment box.