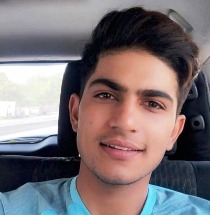 Shubman Gill Biography – An emerging Indian cricket star who imitated Sachin Tendulkar in his childhood while watching him on TV!

Shubman Gill, born on September 8, 1999, in Fazilka, Punjab, comes from a family of agriculturists.

His father, Lakhwinder Singh, and mother, Keart Gill, have been instrumental in supporting his passion for cricket from a young age.

From a young age, Gill showed a keen interest in cricket. Recognizing his passion, his family provided him with the necessary environment to pursue his dream. Gill’s father, Lakhwinder Singh, played a crucial role in his journey as a cricketer.

Despite not being able to fulfill his own dream of becoming a cricketer, Lakhwinder initiated his son’s training and taught him the basics of the game.

Due to the lack of proper facilities for cricket in Fazilka, Gill’s family shifted to Mohali and rented a house near the Punjab Cricket Association (PCA). At the age of 8, he was enrolled in PCA and his cricket journey began.

Under the guidance of his father and experienced coaches at PCA, Gill honed his skills and developed into a promising cricketer. He quickly progressed through the ranks, representing his state and country at various levels.

Gill’s hard work and talent have established him as a key player in the Indian national team. He is known for his reliable batting and has been instrumental in India’s successes in international cricket.

Shubman’s journey in cricket began at a young age. He made his debut in the Under-16 District-level match at the age of 11, where he scored 330 runs in just 5 innings.

He also represented India in the Under-19 World Cup 2018, where he scored 372 runs at an average of 124.00, and won the Player of the Tournament award as well as the Vice-captain of the Team.

On January 31, 2019, Gill made his One Day International debut against New Zealand in Hamilton.

Later, on December 26, he made his Test debut against Australia in Melbourne, where he scored 45 runs in the first innings and not out 35 runs in the second innings, which eventually led India to win by 8 wickets.

Gill’s career in the Indian Premier League began in 2018, when he was bought by KKR at the IPL auction for Rs. 1.8 crores. He played 13 matches in the tournament and scored a total of 203 runs.

He was retained by KKR for the 2019 and 2020 seasons, and later bought by Gujarat Titans (GT) for the 2022 season. Throughout his IPL career, Gill has consistently shown his abilities as a reliable batsman.

Shubman Gill’s rise in the world of cricket is a testament to his talent and hard work. His performances at various levels have established him as a key player in the Indian national team.

With his dedication and consistency, he continues to make a name for himself in the world of cricket.

I hope you liked the Biography of cricketer Shubman Gill and if you have any queries regarding this post, let us know in the comment box.