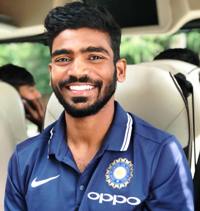 Kona Srikar Bharat (aka KS) Biography – From a ‘Ball Boy’ to the ‘triple centurion’ wicket-keeper!

Kona Srikar Bharat was born on October 3, 1993, in Visakhapatnam, India. His father’s name is Srinivas Rao, a Naval Dockyard employee. His mother’s name is Kona Devi.

He has a sister named Manoghna Lokesh.

KS Bharat is married to Anjali. They both decided to marry after dating ten years to each other.

Bharat’s restless nature at a very early age made his father enroll his name in the Local Cricket Association as a Ball Boy. So, watching the cricket from that close put him too close to the cricket. By the time he turned 10, he had already started playing cricket. During one of his trials, Mr. J. Krishna Rao, his coach, saw his talent and guided him later. When Bharat was 12 years old, Rao asked him for wicket-keeping as his reflexes were so impressive at that little age.

He has played Under 13 to the Under 19 cricket team for Andhra Pradesh.

At the age of 19, on February 20, 2012, KS Bharat started his List-A career from Vijay Hazare Trophy against Tamil Nadu. He could score only one run before getting bowled out. Vijay Shankar was also one of the six players who made their debut.

In Ranji Trophy 2012-13 season, he made his First-Class debut opposite Kerala, in which he scored 8 & 38 runs in the first and second innings, respectively. He also took three catches in the match as a wicket-keeper. In the 2014-15 season of the Ranji Trophy, Bharat scored a triple century against Goa. With six sixes and 38 fours, he scored a total of 308 runs in 311 balls.

In the same year, Srikar was signed up by Delhi Daredevils at his base price, but unfortunately, he didn’t get any chance to play in the IPL.

On March 17, 2013, Bharat made his T20 debut with Vijay Shankar, Baba Aparajith, and four others. He scored 15 runs in 21 balls against Tamil Nadu.

He’s also a regular player for India-A. He has scored centuries against teams like England Lions, Australia-A, and Srilanka-A. In November 2019, Bharat was selected for the second test match against Bangladesh as a backup for Wriddhiman Saha.

Royal Challengers Banglore bought (20 lakhs) him at the auction ahead of the IPL 2021. After that, Delhi Capitals (DC) bagged him for IPL 2022. Q2: What is the height of Srikar Bharat?

I hope you liked the Biography of Kona Srikar Bharat and if you have any queries related to it, let us know in the comment box.