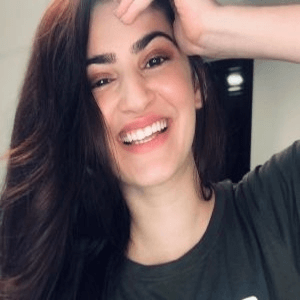 Shivaleeka Oberoi Biography – A new talented Bollywood actress who wanted to marry Salman Khan at the age of 5!

Shivaleeka Oberoi was born on July 24, 1995, in a Khatri Family in Mumbai, Maharashtra. She grew up in Mumbai, but her grandparents are originally from Punjab.

She has an elder sister named Srishti Oberoi, who has been married since 2018.

Her late grandfather, Mahavir Oberoi, also had a Bollywood connection. He made the Bollywood film Sheba and Hercules in 1967.

She did her primary education at Arya Vidya Mandir School and finished her schooling at Mumbai’s Jamnabai Narsee School.

She has completed her graduation from Mumbai University, where she studied English and Psychology as her Majors. Also, she has a diploma in acting from the ‘Anupam Kher’s Actor Prepares’ acting institute.

Oberoi fell for acting at a young age of 4 or 5 when she first saw Kareena Kapoor in Kabhi Khushi Kabhie Gham. Soon, she started imitating her, and that’s how things started for her.

Later, when she was pursuing her graduation, she joined actor Anupam Kher’s acting institute, where she learned the nuances of acting skills.

Then, she acted in a few commercials and also started modeling in Mumbai. Meanwhile, the film director and producer, Sajid Nadiadwala, asked her to assist him with Housefull 3. It was her first film as an assistant director.

She has also worked as an AD in Salman Khan’s starring Kick. She did ‘claps’ before the shots in the movie and assigned the movie scenes to Salman and other actors.

Later, in 2019, Shivaleeka Oberoi finally made her acting debut from Yeh Saali Aashiqui, a romantic thriller film, alongside Vardhan Puri.

She appears in her second movie, Khuda Hafiz, with Vidyut Jammwal. The film aired in August 2020 on Disney + Hotstar.

Q1: What is the age of Shivaleeka?

Q2: Who is the husband of Shivaleeka Oberoi?

Ans: She was rumored to be engaged with Karam Rajpal, but she denied the news later.

Q3: What is the height of Shivaleeka Oberoi?

Q4: Who is the sister of Oberoi?

I hope you liked the Biography of Shivaleeka Oberoi and if you have any queries regarding this post, let us know in the comment box.