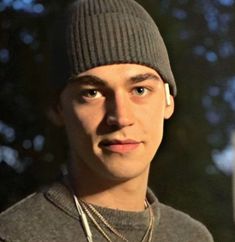 Hero Fiennes Tiffin Biography – An English Actor & Model who started his career at the age of 11!

Hero Fiennes Tiffin is a British actor who was born on November 6th, 1997 in London, England. He comes from a family of filmmakers and actors, with his father George Tiffin working as a director, cinematographer, writer, and producer, and his mother Martha Fiennes working as a writer, producer, and film director.

Martha Fiennes has achieved notable success in the film industry, winning the Best Director award at the Tokyo International Film Festival in 1999 for her film Onegin.

Hero Tiffin has a younger sister named Mercy Fiennes Tiffin and an older brother named Titan Fiennes Tiffin. His sister has also appeared in a film, The Duchess, where she played the role of Little G.

In addition to his immediate family members working in the entertainment industry, Hero Tiffin also has two actor uncles, Joseph and Ralph Fiennes.

The actor and model received his primary education at Raey Primary School in Lambeth and Emanuel School in Battersea. He later completed his sixth form education at South London’s Graveney School.

Although he did not attend college, he was confident in his ability to succeed in the acting field. After completing his schooling, he began his career as an actor and model. His determination and talent have led to his success in these fields.

Hero Fiennes made his debut in a British movie named Bigga than Ben in 2008 at 11. The following year, he appeared as the young Voldemort in Harry Potter and the Half-Blood Prince. And the fun fact is that the character, Lord Voldemort, was portrayed by his uncle, Ralph Fiennes.

Later, in 2012, he made an appearance in another British film named Private Peaceful. He played the role of young Charlie in the movie. Then, he appeared in two short films, Possession With Intent To Supply and ERDEM X H&M The Secret Life of Flowers.

After a long break in 2019, Hero Tiffin finally starred in a feature film named After, along with Josephine Langford, the younger sister of Katherine Langford.

He played the role of Hardin Scott in the movie, based on the adult fiction novel, After, written by Anna Todd.

Then, in 2020, he starred in an American-Canadian film, The Silencing, with the actors like Coster-Waldau and Annabelle Wallis.

The lead actors of After, Hero Fiennes and Josephine, are also appeared in its sequel titled After We Collided, based on a novel with the same name written by Anna Todd.

In 2018, Tiffin made his TV debut by Safe, a British mini-series aired on C8 in France and streamed on Netflix internationally. He played the role of a teenager named Ioan Fuller and had appeared in the five episodes of the series.

The same year, he was seen in one of The Tunnel’s episodes, a British-French television series. Subsequently, in 2019, he appeared in another British TV drama, Cleaning Up, as Jake, portraying the boyfriend of Alice, played by Kristy Philipps.

In 2020, Tiffin lent his voice to a character in an audio series named Day by Day. The series has featured actors like Josephine Langford, Nadia Alexander, Austin Crute, Timothy Simons, etc.

I hope you liked the Biography of Hero Fiennes Tiffin, and if you have any queries regarding this post, let us know in the comment box.