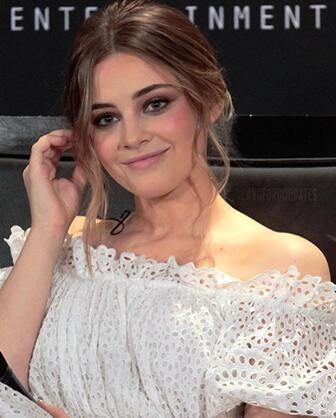 Josephine Langford Biography – An Australian actress who is doing significant roles one ‘After’ another!

Josephine Langford is a talented actress from Perth, Australia. Born on August 18, 1997, Josephine comes from a family of accomplished professionals.

Her mother, Elizabeth Green, is a pediatrician with a private practice in Perth and is also a member of the NBPSA (Neurodevelopmental and Behavioural Paediatric Society of Australasia).

Josephine has an older sister named Katherine, who is also an actress and gained fame for her role as Hannah Baker in the series 13 Reasons Why.

Josephine received her education at Perth Modern School and St Hilda’s Anglican School for Girls in Perth, WA. She graduated in 2014 from All Saints’ College, Perth.

Her educational background has played a vital role in her career as an actress as it has helped her to hone her skills and develop her talents.

Josephine Langford had a passion for the arts from a young age. She began playing musical instruments such as the violin and piano, and even wrote her own songs for school competitions.

In 2007, at the age of 10, she wrote her first song titled “Lonely”. The following year, she wrote two more songs “Shadows” and “Sea Shanty”.

But her interest eventually turned to acting. So, at the age of 13, she began taking acting classes from Ali Roberts, an acting coach at Ali Roberts Studio in Leederville, WA.

As she continued to develop her skills, Josephine joined Perth Film School at the age of 15 and continued to further her acting education. It’s clear that her early life was filled with a passion for the arts and a drive to develop her talents in various creative fields.

Josephine Langford’s acting career began in 2013 with a series of short films, including “Sex Ed” and “When Separating”. She continued to appear in various short films such as “Gypsy Blood”, “Wreck”, and “Pulse”.

Her dedication and hard work in the short films eventually led to her feature film debut in the 2017 movie “Wish Upon”.

In 2019, Langford starred in the romantic drama film “After” opposite Hero Fiennes Tiffin. The movie was based on the novel “After,” written by Anna Todd. Her portrayal of Tessa Young in the film was praised by critics and audiences alike.

The film was a huge success, and Langford reprised her role in the sequel “After We Collided” released in September 2020. In 2021, she appeared in Moxie. Also, she starred in the third (After We Fell) and the fourth part (After Ever Happy) of the movie.

Then, in 2022, she starred in “Gigi & Nate,” an age-coming drama movie. Her upcoming moves are – After Everything and The Other Zoey.

In addition to her film career, Langford has also made appearances on television. She made her TV debut in 2017 with the Australian horror series “Wolf Creek” and appeared in two episodes as Emma Webber.

In 2019, she appeared as Clair Singer in an episode of the American horror web series “Into the Dark.” In 2020, she lent her voice to the podcast series “Day by Day” for the characters Lucy and Belle in two different episodes.

With her versatile acting skills and dedication, she has established herself as a talented actress in both film and television.

I hope you liked the Biography of actress Josephine Langford and if you have any queries regarding this post, let us know in the comment box.