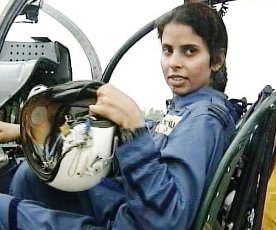 Gunjan Saxena was born on June 04, 1972, in New Delhi, India. Her father is a retd. Army Officer & mother is a homemaker. Her elder brother too served the Indian Army. Gunjan’s husband is also a pilot in the IAF. The couple has a daughter & a son.

Once Gunjan’s elder brother showed her a fighter plane and from that day onwards she decided to become an Air Force pilot.

Later, while pursuing her graduation from Delhi’s Hansraj College, she also did her flying training from a club in Delhi.

In 1994, Gunjan was selected as a trainee pilot along with 25 other women pilots in the Indian Air Force. It was also the first women batch of the IAF.

She was first posted in Udhampur of Jammu & Kashmir state, where she

Kargil war started with Pakistan between May & June, in 1999. At the same time, Flight Lt. Gunjan Saxena and Flight Lt. Srividya Rajan from the very first women batch of Air Force got an opportunity to show their skills in the war zone.

There were women officers in IAF in the past too, but they were never been allowed to get in cases like war. In such a situation, the arrival of two women in the war zone was nothing short of pride.

She was equipped with a loaded rifle and a revolver, as she had to fly near the enemies and could have to land in their area in case of an accident.

They had to air-drop the necessary supplies to the Indian army troop which was posted at a very high position. Apart from this, Gunjan also had to take back the wounded and martyred soldiers from her helicopter.

In addition, they were constantly informing the army about the enemy’s position, which is an important aspect of any war. Gunjan and Srividya’s role proved to be splendid on peaks like Batalik and Drar.

According to Gunjan Saxena, She had moved very close to the enemy zone and came under the range of a Pakistani launcher, but somehow she managed to escape the situation and continued her mission.

Kargil War came to an end on 26 July 1999, as the heroes of India forced their enemies to kneel and since then Kargil Vijay Divas is celebrated on July 26 in India.

Hope you liked the Biography of Gunjan Saxena and if you have any query related to it, then definitely tell us in the comment box.