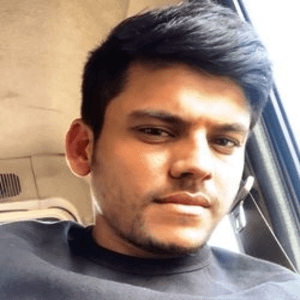 Priyam Garg Biography – From playing cricket at 6 to leading a team at the World Cup!

Priyam Garg was born on November 30, 2000, in Meerut, Uttar Pradesh. His father, Naresh Garg, is a school van driver. His late mother’s name was Kusum Devi.

Priyam has three elder sisters named Pooja, Reshu, and Jyoti Garg, and one elder brother, Shivam Garg. Two of his sisters are related to the medical field, and the other one is preparing for some exam.

Priyam started playing cricket at the age of 6. He was so good that people around him began to tell his father to make him join a cricket academy for proper training. But his family’s financial conditions were not so good, so his father did some odd things like milk selling. Even at one point, his father started newspaper distribution work to pay for his son’s expenses.

So, somehow, he got admitted to a cricket academy in Meerut, where he started playing cricket under the guidance of Sanjay Rastogi. Later, at the age of 12, he got selected for the UP Under-14s state team, in which he scored a half-century on his debut series.

Meanwhile, in 2011, unfortunately, his mother died due to a disease. His mother wanted him to play for India. Even when his father was not supportive of playing cricket, his mother had always believed in him. It made him so miserable that he stopped playing cricket for a while.

However, his father and the coach convinced him to continue his cricket practice. He then played for UP Under-16s before joining the Under-19s team.

On December 18, 2016, he made his Youth ODI debut for India against Sri Lanka at Under-19s Asia Cup 2016. Priyam Garg’s 32 not out and Shubmans Gill’s 78 runs led India to win that match by six wickets. Garg was also part of the final of the Asia Cup in which he bowled out for just five runs; however, India won the title.

On September 19, 2018, he started his List-A career for Uttar Pradesh, opposite Saurashtra. He scored 38 runs off 38 balls in the match. A month later, he made his First-Class debut against Goa and scored a century on the debut match. 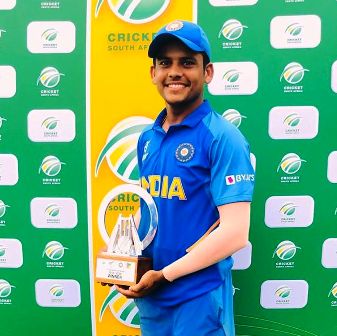 Later, in the final, Garg was one of the four Indian batsmen, including Jaiswal, who scored a fifty-plus score, which ultimately led the Indian side to win the series. He also led the winning side in the 2020 South Africa Quadrangular Series.

In December 2019, he was named the captain of the Indian side for the 2020 ICC Under-19s World Cup. On January 19, 2020, he played his first-ever world cup match against Sri Lanka. Garg made his maiden fifty on his debut, alongside Yashasvi Jaiswal and Dhruv Jurel. 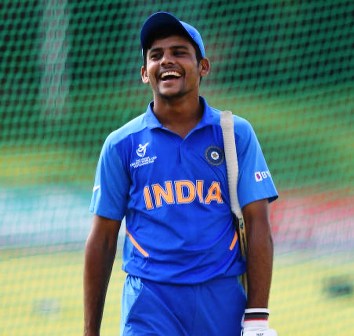 He didn’t get the chance to bat in the next two matches. Later, in the quarter-final, he did get the opportunity to bat but was bowled out at a score of 5. However, half-centuries from Atharva Ankolekar and Jaiswal led the team to reach the semi-final. Then, in the sem-final match against Pakistan, he didn’t get the chance to play but once again, Jaiswal’s superb inning of 105* led the team to reach the finals against Bangladesh. However, he couldn’t lead his team to win the world cup.

Sunrisers Hyderabad (SRH) signed Priyam Garg for the 2020 IPL for whopping 1.9 crores. He made his debut for SRH on September 22, 2020, against Royal Challengers Bangalore (RCB). He scored his maiden fifty (51* off 26 balls) against Chennai Super Kings (CSK).

Q1: What is the height of Priyam Garg?

Q2: What is the age of Priyam?

Q3: Where is the hometown of cricketer Garg?

Q4: Who is the girlfriend of Priyam Garg?

I hope you liked the Biography of Priyam Garg and if you have any queries regarding this post, let us know in the comment box.