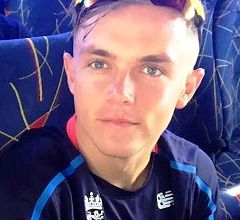 Sam Curran Biography – The youngest English Cricketer in a century named one of Wisden’s Cricketers of the Year (2019). 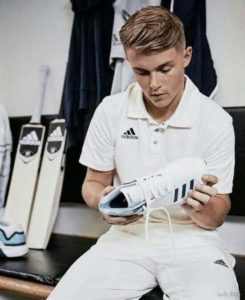 His father, Kevin Curran, was an international cricket player and the coach of the Zimbabwean cricket team. His mother’s name is Sarah Curran. Even his grandfather was also a cricketer who had played first-class cricket for Zimbabwe.

Sam has two brothers named Tom Curran and Ben Curran, and Sam is the youngest among them.

Tom Curran, the oldest, is currently playing international cricket for England, while Ben Curran is a regular batsman of the Northamptonshire cricket team.

Both Tom and Sam Curran are all-rounders like their father.

Earlier, his family had to leave their house because of the Land Reform Policy in Zimbabwe. Later, Kevin became the coach of the Zimbabwe cricket team.

It was Kevin who taught the basics of cricket to his sons, but unfortunately, he died due to a heart attack in 2012. After his death, Alec Stewart, former English Cricketer and family friend of Currans, asked them to move to Surrey.

So, before moving to England, Sam had already played for the Under-13 Zimbabwe cricket team. In a tournament in South Africa, he took 3 wickets and scored 65 runs in 5 matches.

So, his family shifted to Surrey. And under the guidance of Allan Lamb (former English Cricketer), Sam and Tom started playing age-group cricket.

The Brothers – Sam and Tom Curran:

In 2015, Sam and Tom Curran took 10 wickets together in the County Cricket Championship against Northamptonshire at The Oval.

He completed his schooling at Marondera’s Springvale House Preparatory School. He did his higher-level education at St. George’s College, Harare, and Berkshire’s Wellington College.

Sam played Under-15 and Under-17 level cricket for Surrey and had represented Weybridge in Surrey Championship Divison.

In 2015, He made his First-Class debut against Kent in County Cricket Championship. He took 5 wickets in a match and became the youngest player ever to do so in the tournament’s history.

On July 13, 2015, he made his first-class debut against the same team in the County Championship Division 2. He took 5 wickets in the first innings and 3 wickets in the second innings and also played some handy shots with the bat.

Later, on June 27, he started his List-A career against Northamptonshire, in which he took 4 wickets at an economy of 4.57.

On June 01, 2018, Curran started his international career from the Test match against Pakistan. He took 2 wickets and scored 20 runs in the game.

Later, on June 24 of the same month, he played his first One-Day International match against Australia. He took 2 wickets in his 6 overs quota and scored 15 runs with the bat.

On November 01, 2019, he made his T20 International debut against New Zealand, in which he took the wicket of Martin Guptil.

Sam Curran was bought by KXIP at IPL 2019 auction for a whopping price of ₹ 7.20 Crore. 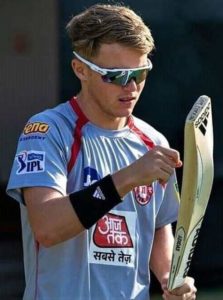 He got the highest bid at IPL 2019 auction among the overseas player, while Varun Chakravarthy (KXIP) became the highest bid-getter in the category of uncapped-Indian player.

Curran was bought by CSK for 5.5 crores at the IPL auction for the year 2020. His first wicket for CSK was Quinton de Kock.

Q3: What is the Nationality of all round cricketer Sam?

Q5: Who is the girlfriend of Sam Curran?

Hope you liked the Biography of Sam Curran, the youngest star of England Cricket. If you have any queries regarding this post, then let us know in the comment box.