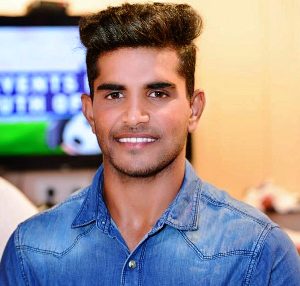 Shivam Mavi Biography – India’s fast-bowling all-rounder who can bowl up to 140+ Kmph with excellent consistency!

Shivam Mavi was born on November 26, 1998, in Uttar Pradesh, India. His father, Pankaj Mavi, is a private contractor in Noida. His mother, Kavita Mavi, is a homemaker.

He also has a sister named Shalu Mavi.

His family shifted to Noida from Sina village of Meerut.

Mavi did his high schooling at Noida’s City Public School. He completed his 12th from the National Institute of Open Schooling. Later, he graduated with a Bachelor of Business Administration (BBA) from Al-Falah University, Haryana.

He started playing cricket at a very young age. His neighbors and friends had always admired his skills back then, as he used to play very well in the “gully cricket.” But, his father wasn’t sure initially regarding his future in cricket; also, he wanted him to be a Doctor or an Engineer.

However, Shivam’s passion for cricket forced his father to let him join a cricket academy. So, at the age of around 8, he joined the Wonders Cricket Club academy in Noida. There, he started honing his cricket skills under Phool Chand Sharma.

Initially, he used to practice batting. But, one day, a bowler in the academy got absent, so the coach asked Mavi for bowling. He bowled so well in that session that his coach told him to focus on bowling rather than batting, and that’s how his cricket journey began.

After focusing more on his bowling, he slowly generated more pace for it. It helped him get more chances to play cricket at the local level, as he could also bat.

Soon, he managed to get in the Delhi under-14s team, where he picked 11 wickets in just three matches. Then, for the next two years, he remained the highest wicket-taker in the state under-14s level. But, due to some reasons, he didn’t get selected for the under-16s team.

Later, on February 01, 2017, Mavi made his debut for India under-19s against England under-19s. He bowled five overs and picked two wickets in the match. In his next game of the series, he again picked two wickets, including the wicket of Tom Banton.

Shivam Mavi also played in the 2017/18 ICC Under-19 World Cup. In his first world cup match, he picked three wickets for his team, along with Kamlesh Nagarkoti, who also picked the same number of wickets.

Then, in Quarterfinal, against Bangladesh, he bowled eight overs and picked two wickets in the match. In the semi-final, against Pakistan, he couldn’t get any wicket, but Shubman Gills’ 102* runs and Porel’s four wickets helped India get into the tournament’s final.

In the final, against Australia under-19s, he managed to get a wicket out of the eight overs he bowled in the match. Splendid bowling by the bowlers and Manjot Kalra’s 101* runs in the final helped India win the world cup.

On August 27, 2018, Mavi started his List-A career by playing against South Africa A for India A under the captainship of Shreyas Iyer. He bowled six overs in the match with an economy of 4.50.

The same year, on November 01, he made his First-Class debut for Uttar Pradesh against Goa in the Ranji Trophy. He picked five wickets in the match. Priyam Garg also made his debut on the same day, scoring 117* runs in his first match.

Kolkata Knight Riders (KKR) bought Shivam Mavi at a whopping price of three crores for the IPL 2018. He made his IPL debut on April 14, 2018, in which he bowled just one over. Mavi’s maiden IPL wicket was Gautam Gambhir.

He missed his next season of IPL because of his injuries. However, he remained a part of the team for IPL 2020. Later, KKR bagged him at the auctions for 7.25 crore for the 2022 IPL.

I hope you liked the Biography of Shivam Mavi and if you have any queries regarding this post, let us know in the comment box.