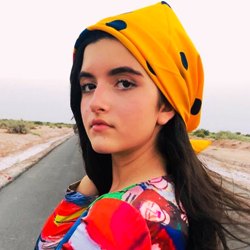 She comes from a multicultural background, with her mother, Sara Astar, being Norwegian, and her father, Gerry Christian Slattman, working as a Petroleum Engineer. Sara Astar, Angelina’s mother, has been very supportive of her daughter’s career from a young age.

Angelina’s grandparents include her maternal grandmother, Mery Zamani, who is an Iranian poet and painter. She also has a younger sister named Juliette Slattman.

She did her primary schooling at Oslo Waldorf School. Later, she attended Oslo School of Music and Performing Art, where she did her vocal training.

The ‘Talent’ From Norway to the USA:

Angelina Jordan was about one and a half years old when she first heard Whitney Houston’s “I’ll Always Love You” on YouTube. She used to listen to that song continuously and tried to imitate it, and that’s how her parents discovered her talent.

After that, she honed her singing skills by observing singers like Diana Washington, Frank Sinatra, and Billie Holiday, which ultimately strengthened her passion for singing.

In 2014, when Angelina was seven years old, she participated in “Norske Talenter” (Norway’s Got Talent), a talent hunt show of Norway. In the audition round, she had amazed the judges and the audience sitting out there by singing Billie Holiday’s version of the “Gloomy Sunday.”

Later, she won the show, became a star in the country, and got famous in other parts of the world. She then featured in various renowned media outlets like TIME, CNN, People’s magazines, etc. She has also performed for US-based TV shows, like The View and Little Big Shots.

After winning Norway’s Got Talent at the age of 8, Angelina participated in America’s Got Talent. In her first audition at the show, she stunned the AGT judges with the “Bohemian Rhapsody” cover.

After her performance, she also got a standing ovation from the judges and audience. Angelina’s mother and sister were also sitting out there. Lastly, Angelina won Heidi Klum’s Golden Buzzer. She later thanked Heidi for giving her the golden buzzer. However, she couldn’t reach the top 5 of the reality show.

Have you ever noticed that ‘why’ Angelina always performs barefoot at any stage? If not, then please do watch her videos. The reason, as it turns out, is rooted in a powerful and inspiring moment from her childhood.

When Angelina was just six years old, she was living with her family in the Middle East. One day, she met a young girl who was working as a street vendor. The girl was enamored with Angelina’s shoes, and in a generous gesture, she gave her shoes to the girl.

In that moment, the little vendor shared her dream of becoming a doctor, but expressed doubts about her ability to achieve it. So, the six-year old Angelina asked her to never lose hope. In respose the little said she would always pray for Angelina.

This encounter left a lasting impression on Angelina, and in honor of the young girl who inspired her, she decided to perform barefoot on stage. To her, it serves as a reminder of that powerful moment of encouragement and a symbol of her commitment to following her dreams, no matter how impossible they may seem.

After the powerful encounter with the young street vendor, Angelina was deeply inspired to tell the story of that moment and how it has shaped her life. She wrote a book titled “Mellom to Hjerter,” which means “Between Two Hearts” and was illustrated by her grandmother Zamani.

I hope you liked the Biography of Angelina Jordan Astar and if you have any queries regarding this post, then let us know in the comment box.