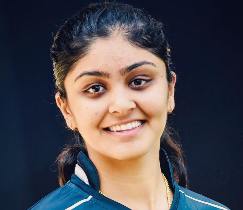 Harleen Deol Biography – A cricketer from Punjab who left home at the age of 13 just to play cricket!

Harleen Deol was born on the 1st of June, 1998, in Chandigarh, India. Her father’s name is Baghel Singh Deol.

She has a brother named Manjot Singh Deol, a dental surgeon.

She completed her schooling at Yadavindra Public School. She is pursuing her graduation with a Bachelor of Arts from Mehr Chand Mahajan DAV College, Chandigarh.

Later, at the age of twelve, she caught the eyes of coach RP Singh during a district match, who later selected her in the state team.

She used to be an off-spinner, but her coach advised her to try more leg-spin instead of off-spin. That is how she becomes a leggie. Then, at the age of 12, she made her debut in Domestic cricket for Punjab.

Soon, her father transferred to Himachal Pradesh, where she later visited on vacation. She was impressed by the facilities young girls were getting there, so even she asked her father to shift her base. Only then did she start playing cricket for Himachal Pradesh.

At the age of 13, Harleen Deol started playing cricket for HPCA. In 2013, she made her T20 debut for Himachal Pradesh. Then, in 2014, she started her List-A career for HPCA. Later, in 2015, she represented North Zone in the under-19s cricket.

Soon, she made her IPL T-20 challenge debut for Trailblazers, where she scored 36 off 44 balls. In January 2020, Harleen Deol was named in India’s squad led by Harmanpreet Kaur for the 2020 Women’s T20 World Cup; however, she didn’t get the chance to play in the tournament.

I hope you liked the Biography of cricketer Harleen Deol and if you have any queries regarding this post, let us know in the comment box.